As many of you remember 2015 started with a large amount of rain, causing the grass  to grow excessively, we were mowing and blowing non-stop. Then the summer started and everything began to dry out and with a shallow root system a few areas begin to check out. After summer ended  we were able to get the rough seeded and fertilized. Then we finally get to winter and we continue to have unseasonably warm weather. This weather has allowed us to get leaves mulched, Irrigation shut down, and some final fertilization on greens. Hopefully this weather has allowed you time to get out and play those last few rounds of golf to end the 2015 year.
So on behalf of myself, my assistant, and the entire staff of Minor Park Golf Course, we would like to wish you a Happy Holiday and look forward to seeing you in 2016.
By Matt Delventhal at December 18, 2015 No comments:

Getting Ready for Winter

Just a little information for your lawn as we head into winter. If you haven't already seeded those bare or thin spots in your yard you may want to think about getting it out a soon as possible before your window of opportunity runs out. Also this time of the year is great to fertilize your yard as it prepares for the winter.  This year we got out around 800 lbs of Fescue seed into our rough around greens and Tees.  The germaination is coming up nicely and in a few weeks we will fertilize these areas to help it continue through the winter.

With the cooler temperatures you may have noticed that the zoysia is slowly yellowing off and beginning its dormancy for the winter. We will be mowing them once a week and as the temps continue to fall we will stop mowing and allow the height to come up to allow a blanket of insulation for them.
After aerification is always the best time of the year to play. So please come out to Minor Park and enjoy the ideal playing conditions before winter is upon us.

If you have been out to Minor Park in the last 2 weeks you may have noticed the massive hole we had in the rough on number 15. About 2 weeks ago, we had a 3 inch line break at one of the rough heads. As we began our investigation we realized that the line was more then 7 ft below ground and what we thought was a broken service tee ended up being around 30 ft of cracked pipe. We were able to have the city come out with their backhoe to aid in digging this massive hole. This process took 3 attempts at fixing it until we were successful. The first fix consisted of 20 ft of new pipe and a mechanical fitting. Upon recharge, we found another crack on the existing line, we then shut it down and repaired the damage adding another 6 ft of pipe. On our third attempt at recharging the line, it held for about 5 hrs before it blew out at 2 glue joints.  The final fix we added another 5 ft of pipe and replaced all glue joints with 3 mechanical fittings. Here are a few pictures showing what we encountered along the way. 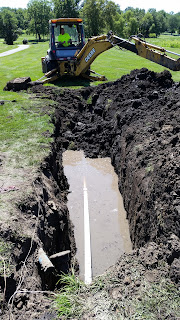 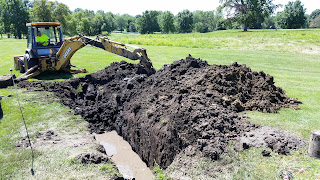 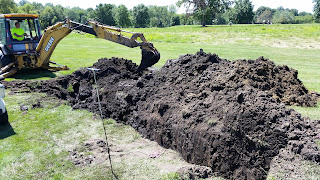 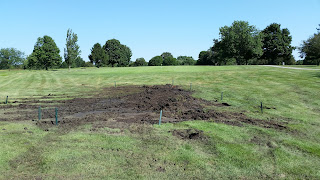 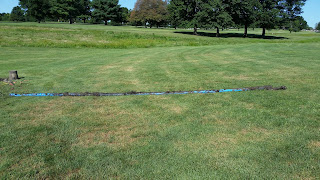 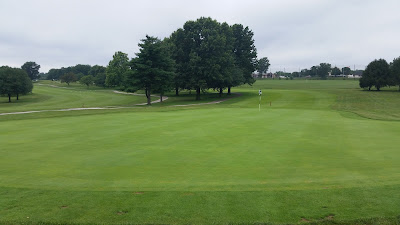 Last season we had a few ball washers that didn't make it out of winter. So what we did to start the season was put a ball washer on 1, 10, and every even hole. With some extra revenue money were are starting to implement new ball washers back onto the holes that don't have one. We have purchased 3 new ball washers and 2 new double sided trash cans to help with recycling at Minor. Each month we are hoping to purchase a few more but at $360.00/setup it may take a few months . As you see in the picture below this is what we are purchasing each month. 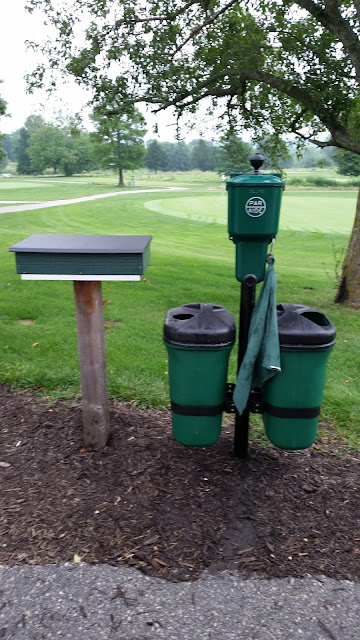 Also a friendly reminder,  it is the season of hand watering. As you play Minor Park please be on the lookout for my staff as they fight the fires of summer. Before you strike your ball please make sure that there is some sort of contact between my staff and yourself . My guys will do there best to keep an eye out for you guys, but if need be feel free to holler or wave at them to acknowledge you are there before you hurl that torpedo rocket at them. Here is a small video that will show you why we water the way we do.


Thank you and look forward to seeing you our at Minor Park Golf Course.

Two full seasons ago we striped in 13 fairway to convert this cool-season fairway that was a mixed bag of poa annua, ryegrass, and anything else that may have moved in throughout the season to the final Zoysia Fairway at Minor Park. The first full season we allowed the Zoysia to established itself in the 7 inch strips. The second year we allowed it to creep out from the strips and begin filling the gaps in between. This season, the third year we began the process of eliminating the cool-season grass to allow the zoysia to take over. We sprayed a product called Revolver. What this product does it that it slowly kills all of the cool-season grass without harming the warm-Season grass allowing it no competition to continue its spread into the voids. As the season goes along you may notice some thin or bare spots as the Zoysia finds its way into these voids. As the temperatures heat up and the Zoysia is growing at its best we will hit it with multiple fertilizer apps to aid with coverage.  It may look ugly as this process progresses but just understand that while it may be an eyesore these are the steps needed to convert this fairway into a solid stand of Zoysia.

Here are a few pictures of the progression of this fairway: 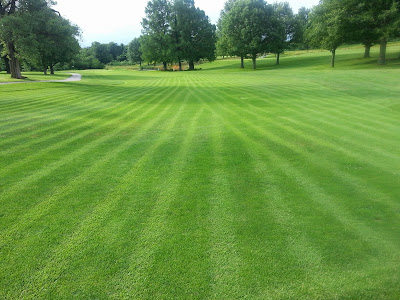 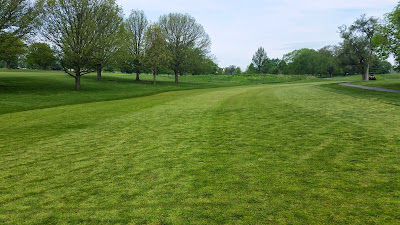 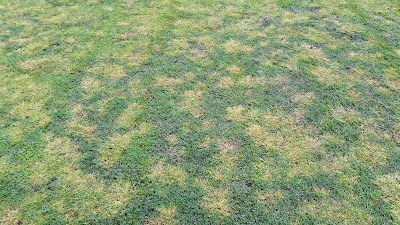 Notice the cool-season yellowing off 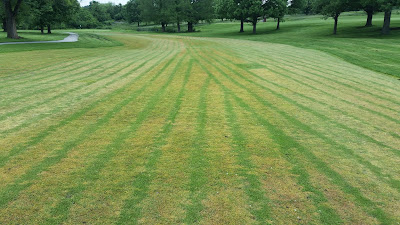 3 weeks post spray. The dark strips are the Zoysia grass 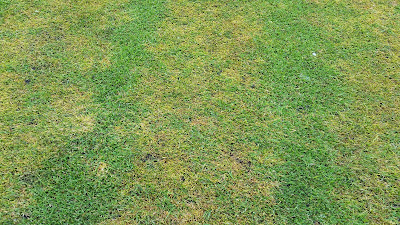 In this picture you can see the spread of the Zoysia grass between the 2 strips. The yellowing grass will slowly disappear while the dark green Zoysia will continue to spread in.

If you have been out to Minor Park this year you may have noticed a lot of little orange pin flags. These flags are out there to mark our new NO-mow areas through out the course. It's funny that we call them no-mow areas but in fact we actually mow them at least 1-2 times a year. With that being said, this is hardly any labor and gas usage compared to the rest of the rough that we mow at least 2 times per week. This weekly mowing of rough consists of mowing  one 9 on Monday, next 9 on Tuesday, skipping Wednesday and repeating the process Thursday-Friday. So if you compared this process to your own lawn you can see that your time and your fuel would be used up very quickly.

Most of the areas we have chosen are areas that are  outside the normal landing areas. They also consist of areas that are close to tee boxes or behind greens. By doing these areas it really helps save labor dollars and fuel costs but it also helps Minor Park have some hole definition. Once these areas have grown enough we will remove the flags. So next time your out playing a round of golf at Minor Park take a look around at these new areas. 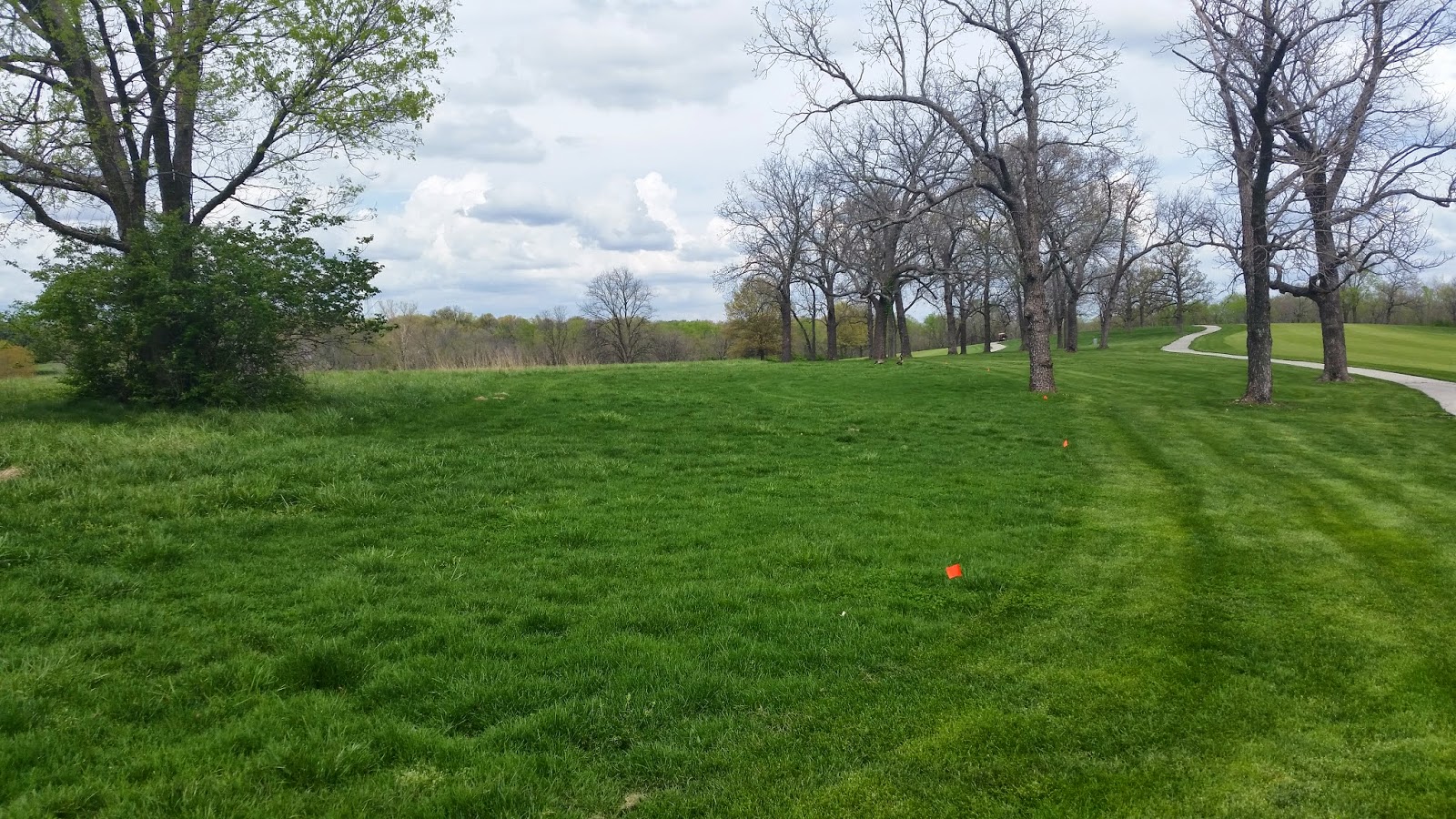 It never fails, every year at Minor Park Golf Course geese begin their yearly destruction of green edges. This year it seems to be a bit more evident due to the winter we are having. With the course being thawed for so long it allows the geese to dig and tear holes into the greens while leaving their unwanted mess behind. We go out every morning and on no golfer days we make multiple rounds scouting for geese and scaring them off with our Bird Screamers. This is a type of firework that we shoot out of a .22 pistol that sends a screamer firecracker into the air. This firecracker produces a loud bang sending the birds into flight and off our property. As this next wave of cold and hopefully some snow cover funnels in we can start to reduce the holes that the geese are digging due to the ground getting frozen.

On warm days we are able to get out and put sand into the holes to temporally allowing for a smooth roll on the green. Then as the bentgrass begins to grow we will begin the yearly process of taking plugs from the nursery green and repairing any large size holes that we feel will not naturally fill in on their own. We also blow off all greens that become covered in goose droppings.

I have always though that geese were a very dumb bird, but I've monitored them enough to know that they begin to know our work schedule as well as my staff does. They like to come in after 3:30 or so and by the time we get here the next morning they are general out of here and all you have left is unwanted goose dung and holes throughout your greens.

Here a few photos that show the type of destruction that geese can cause on putting surfaces: 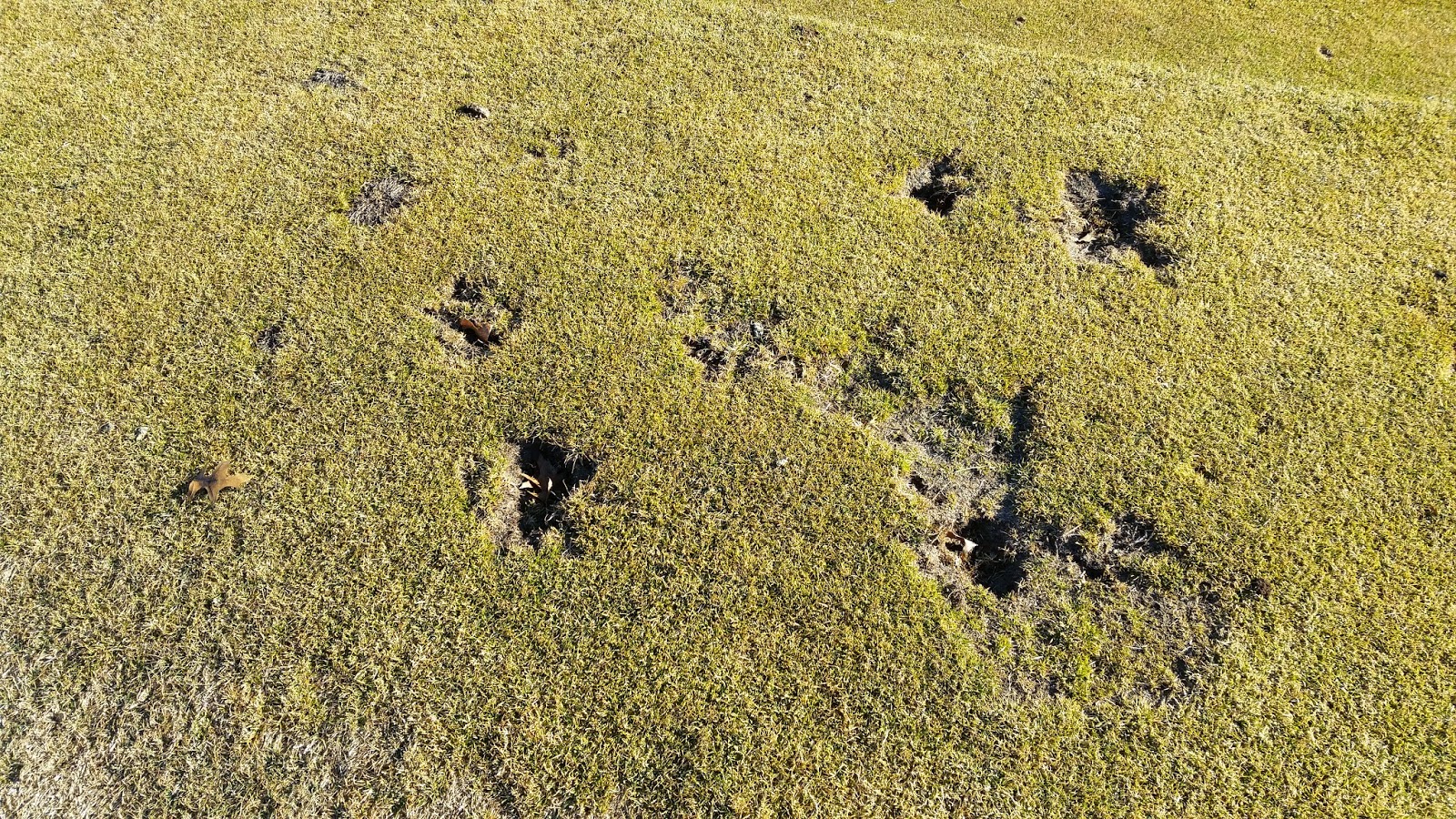 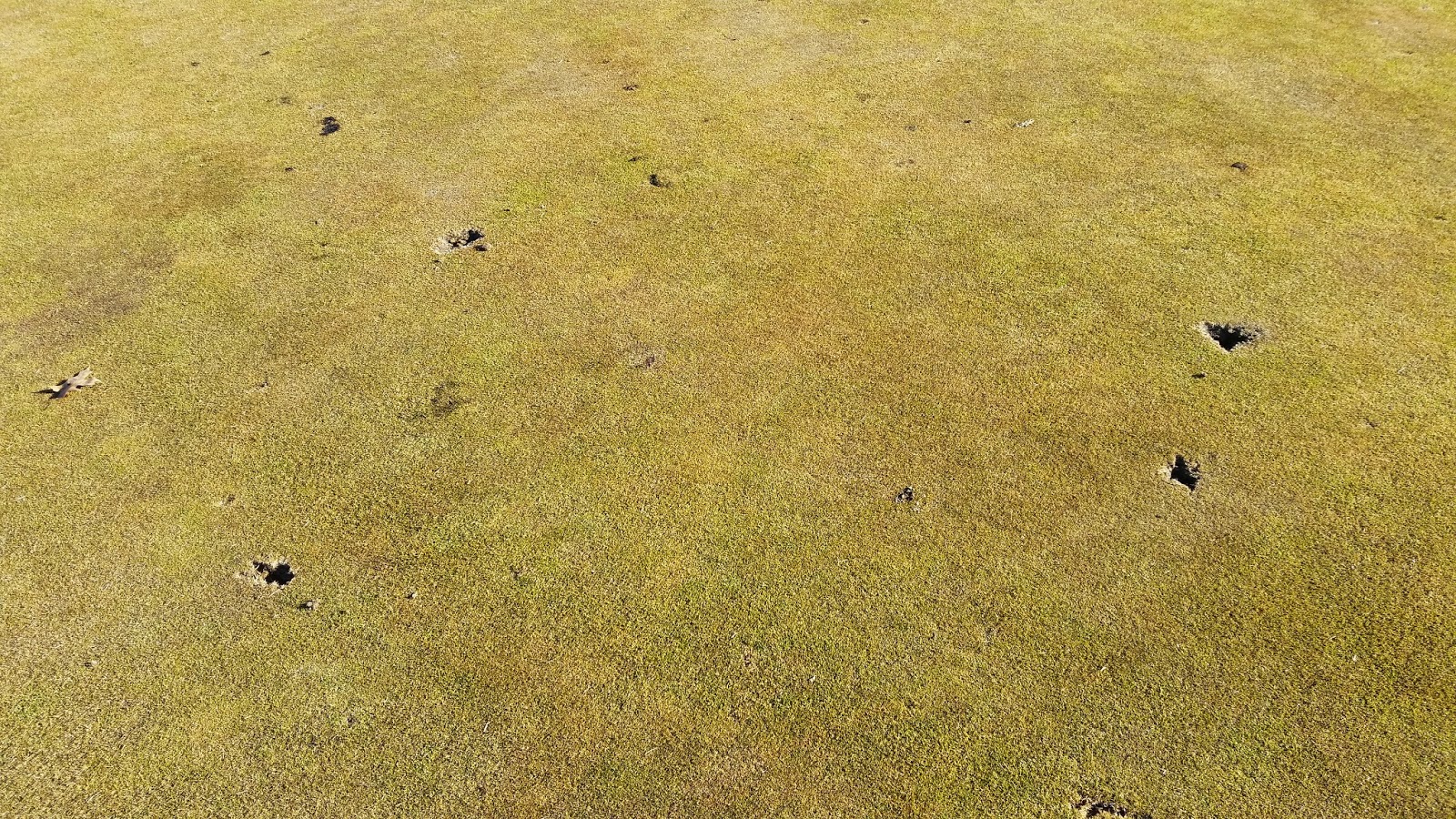 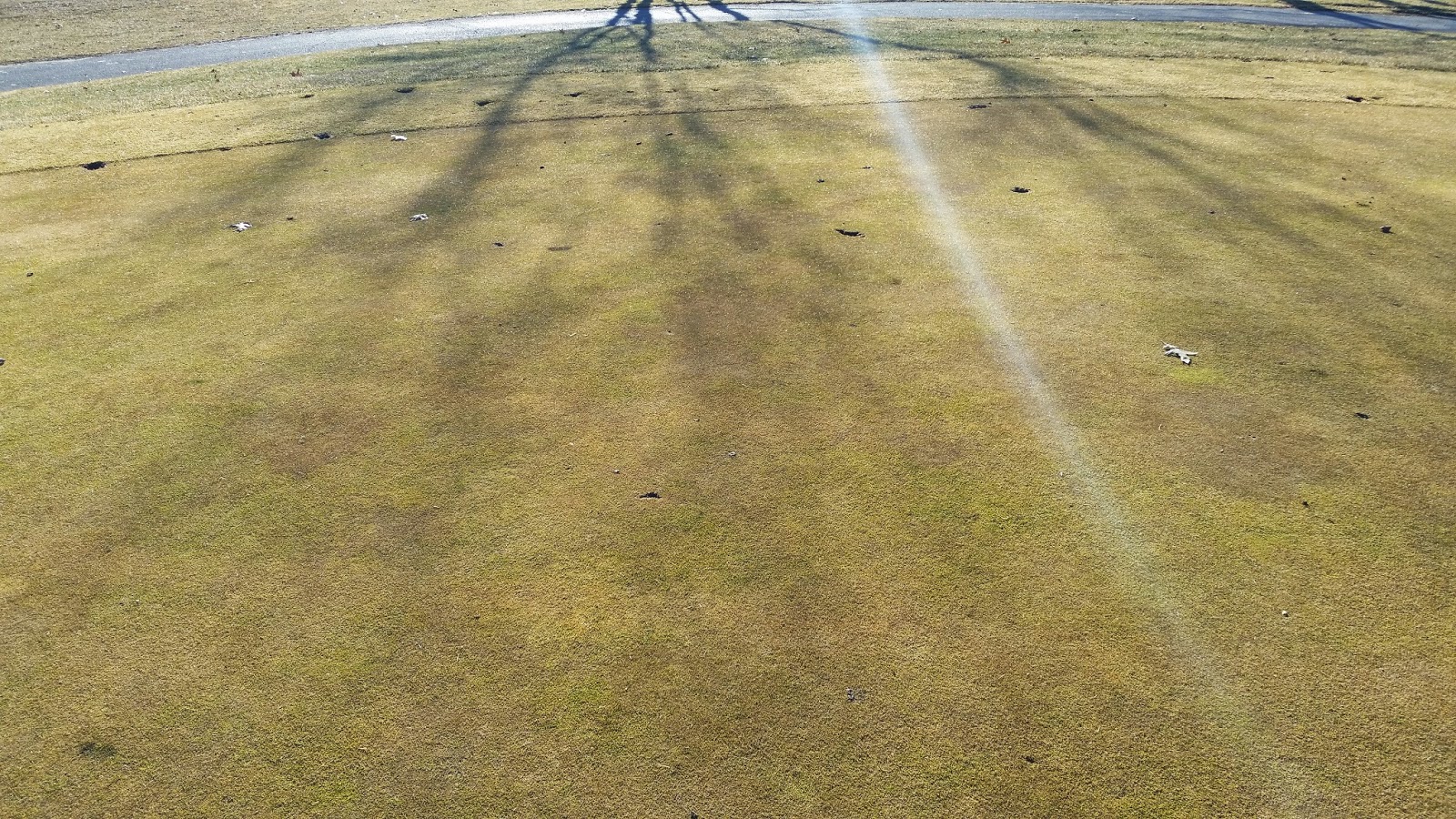 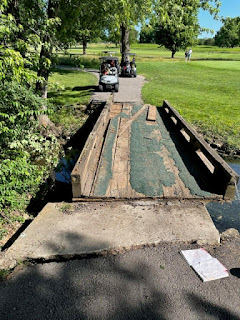